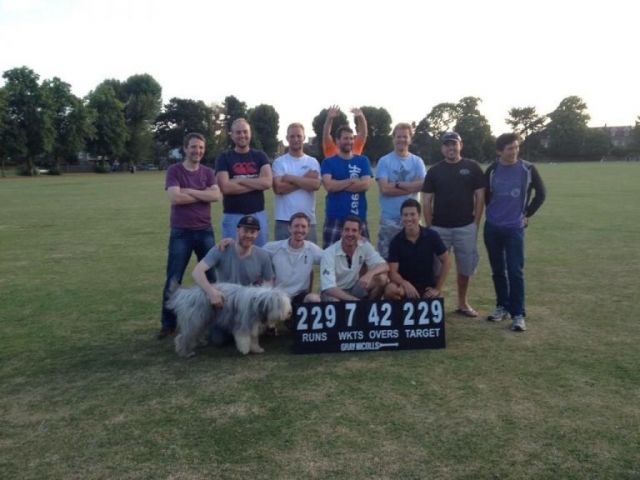 Battersea Badgers wrapped up a thrilling 3-wicket victory over local rivals the King’s Road after a gruelling two days of hard-fought cricket. Beginning the match already 2-0 down in the three-game series, the Badgers were all too aware that a third consecutive defeat would herald the dreaded ‘Orangewash’ – a fate worse than cull.

To mark their series victory, the Road had already bought lurid orange polo-shirts, which caused two unsuspecting onlookers to foam at the mouth and another to rip out their own eyeballs in disgust. The Badgers owed it to the general public and to the cause of common decency that no other poor souls would have to endure the sight of further celebratory purchases.

Having won the toss, the Badgers were keen to make early inroads into their opponent’s batting line-up. Mackrell, Hamblin, Blake, Walker, Foord and Dollimore, the six-man boyband that never was, revelled in their role as pace-attack-extraordinaire and tore in to decimate the Road’s batsmen. However, after only one early scalp, Persad and De Silva (the Robson and Jerome that never was?) thwarted the bowlers at every turn, maintaining their partnership until the score was on 104.

Persad continued his demolition of all that was thrown at him until he found himself four runs away from a classy century. Attempting to reach the milestone in one blow, he carted the ball high and long towards the deep-midwicket boundary. The King’s Road players rose as one to salute their hero but their joy turned to orange ashes in their orange mouths as they watched Shone shimmy round to pouch the catch.

Lomas’ demise was undoubtedly a turning point, heralding further wickets and, a little after tea, King’s Road were finally bowled out for 253. Mackrell starred with the ball, taking 4/50, demonstrating his ruthless showmanship and thereby establishing himself as the Robbie Williams of the bowling troupe.

The Badger players are known for their legendary fitness and incredible physiques but 60 overs in the field had taken its toll. Early wickets left them reeling at 8/3 and even a Charlie Walker six off his very first ball couldn’t stem the appetite of the Road’s bowlers for pain, misery and weak comparisons of certain Badgers to Scooby Doo characters. A ferocious spell from Glover and some pinpoint accuracy from Isham left the Badgers six wickets down at the close of play, with only 110 runs on the board.

Sunday morning dawned and both teams’ players met the day with their familiar pre-match routines. Jinks updated his sticker spreadsheet (yes, it exists), Blake tiptoed away from an unfamiliar bed, Glover practised his shouting and Foord polished his sausage mould. And, over in Balham, there was a man with a plan. Admittedly, it was a drunken plan hatched the previous night in the pub. Admittedly, it was actually his brother’s plan. Admittedly, his brother had not been informed about the exact match situation that the team was facing. However, Captain Dollimore, avec plan, was about to lead his players into one of the greatest days in their history as Badgers.

Day two began with Foord and Thomas (Stu Barker’s illegitimate son) at the crease. Despite the early loss of Thomas (presumably to call his dad and talk about marathons), runs flowed more easily than the previous day. Hamblin carted eight boundaries to the fence, accompanied several times by the roars of an angry Glover. However, his fury turned to glee when a particularly vociferous LBW appeal was finally given. The remaining Badger wickets followed in quick succession, with Glover helping himself to a deserved 6-wicket haul. 183 all out was the scoreline – 70 behind the Road.

In a curious jumble of motoring metaphors, the Road found themselves in the driving seat and accelerated further into the lead with early boundaries from Persad and Da Silva. At 71/2, the game was slipping away from the Badgers and the Orangewash was very much on the cards.

However, this was not a day to submit to a team that wash their kit in vats of Tango. In an inspired piece of captaincy, Dollimore combined his own ruthlessly accurate deliveries at one end with wizardry of Thomas at the other. The runs dried up and the wickets began to tumble. Da Silva, Caesar, Sherman, Glover. The King’s Road middle order was ripped to shreds. A wonderful rearguard from Couldrey stemmed the tide but the Badgers were in no mood to cease their attack. Foord, Jinks and Mackrell joined the fun and, with the crumbs of tea barely settled in their bellies, the Road were bowled out for 158. 3 wickets apiece for Thomas and Mackrell and 4 catches for Shone had put the match on a knife-edge.

229 runs were required, with about 40 overs available in which to get them. The Road could taste the Orangewash. The Badgers were chasing the Orangewreck.

In a feast for the spectators, runs, wickets and more Glover shouting were all on the menu for the final session. A disastrous start for the Badgers saw the first wicket fall for just one run but a period of consolidation and some fast scoring from Warman put the match in the balance once again. 51/3 became 98/4 and then 158/5. Walker, the Texas Ranger, was at the crease and beginning to click but wickets were also running out.

Sensing this, he took the attack to the flagging bowlers, creaming boundary after boundary. Dropped on zero, he was driving the game away from the Road. A sixth wicket fell at 182! A seventh at 207! Would enough batsmen be able to hang around at the other end? More boundaries came. More drops from the fielders. One, two, three, four, five opportunities to send him back to the hutch! All spilled to the welcoming ground. With one final heave of his mighty bat, he plundered his nineteenth boundary and took the score to 229. Badgerwin! Orangewreck!!

Walker finished on 92 not out. The Dolli-plan had worked. The Supertest had lived up to its name once again.