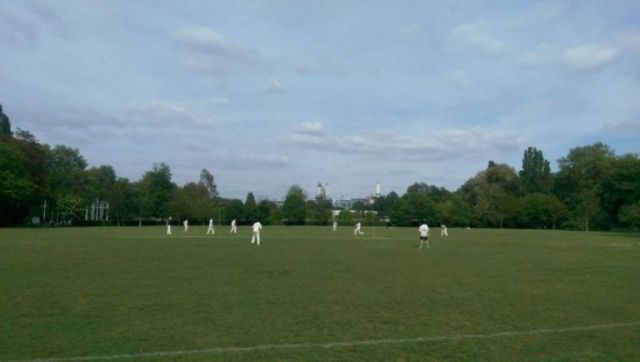 To Battersea Park the Badgers went for the first game on home (but technically away) soil. The Badgers were oversubscribed, but Dr. Jinks being poorly resulted in a civil service swap and Hirst subbing in for the PhD-less Jinks.

The team was looking superb in their new kit with Warman highlighting that the web development business must be going OK striding around head to toe in brand new badger branded kit.

Bam-Bam showed he was nothing if not consistent as Captain by maintaining his losing of the toss streak and so into the field we were sent, Lee looked upset and dishevelled.

Bam-Bam and Dolli opened the bowling, serving some lovely stuff up and delivering wickets a plenty, taking two each and Clokey showing how sporting he is by dropping one to allow the Thesps to extend their innings. Shoney was then handed the ball and was unfortunate not to gain any wickets but looked fantastic whilst doing it.

Then Rory Thomas was handed the ball and wandering in with the action of a silent assassin twirled and twisted the ball, ending up with three wickets for a meagre 10 runs, one of them involving a Cornish stumping which he was just delighted with.

Cade then took the ball, bowled a wide and then to try and get his girlfriend vaguely interested in cricket got two wickets in two balls. This failed to pique her interest and so reverted to type, offering some friendly full tosses.

The Thesps were eventually out for 144 which then saw Cloke and Warman enter the fray opening the Badger batting. And off they went, plundering singles and boundaries a plenty. There was a lot of uncharacteristic good running going on and we were all getting a bit worried.

Clokey was looking in great nick as he hit his 2,000th Badger run to great applause and even scored a super six, hitting boundaries all over and making us fearful for the small children surrounding the pitch.

But the man of the innings (and indeed the game) was Peter Warman, hitting an elegant 55 with shots that would make a Michael Vaughn cover drive look like an ugly slog.

Clokey was eventually out for 21 which allowed Lee some time in the middle to prove that a) he wasn’t that hungover b) he was getting good at jug avoidance with a 48 not out and c) his new pads were pads and not just polystyrene stolen from a skip. Thorpey also got a short bat which we were all very pleased about.

A comfortable Badger win followed by a beer then a poorly organised, if not tasty curry (I managed to be adventurous and move on from Korma to Tikka).